The DFG-Project The Instrumental Music of the Dresden Hofkapelle at the Time of the Saxon-Polish Union. Inventory, Digitization and Online Presentation was carried out at the SLUB from July 2008 to July 2011. As the project name indicates, the goal was the scholarly cataloging, digitization and online presentation of the Dresden Hofkapelle’s baroque instrumental repertoire which, unused since the Seven Years’ War, was filed in the legendary Schrank II. It included autograph or hand-copied compositions by Antonio Vivaldi, Georg Philipp Telemann or Johann Friedrich Fasch and many other significant masters of the first half of the eighteenth century. In the context of the project it also was possible to identify numerous anonymous works. Handwriting and paper examinations in many cases shed light on the time of origin and the original provenance of the manuscripts. The approximately 1750 Schrank-II sources were catalogued electronically according to RISM rules. At the same time high-resolution color scans were prepared from the total stock of the collection, including the 11 existing prints. Incorporated in the RISM Online Catalog, the titels served as a metadata repository for the online presentation in SLUB’s Digital Collections, which are based on the modular digital library software Goobi.

The time of Saxon-Polish union (1697–1763) is considered the most brilliant period of Dresden’s music history. It is the epoch which became the quintessence of Saxony’s cultural flourishing. It began with the election of August the Strong as king of Poland and lasted till the end of the Seven Years’ War. The center of musical life was the Dresden Hofkapelle, which from 1733 on became world famous under the direction of Kapellmeister Johann Adolf Hasse (1699–1783) and his associate, the Vivaldi pupil and concert master Johann Georg Pisendel (1687–1755), who had belonged to the Hofkapelle since 1712. When as a result of Prussian artillery fire in 1760 the court music archive burned, only the music remained which had been stored in other places or currently was in use. Fortunately, it included the numerous instrumental music manuscripts with performance instructions in Pisendel’s own hand and the scores he had copied himself, which in part went back to his Italian trip in l716/1717. About ten years after his death this music was deposited in Schranck No: II in alphabetical order and meticulously labeled, where for the time being it fell into oblivion. About one hundred years later it was rediscovered by court Kapellmeister Julius Rietz (1812–1877). After that Moritz Fürstenau, custodian of the Royal Private Music Collection and flutist in the Hofkapelle, provided them with new call numbers and integrated them into the stock of the Royal Private Music Collection. When the latter was incorporated into the Royal Public Library (1896), the manuscripts became part of the present-day SLUB’s most prominent forerunner. They were kept in the Music Department, which subsequently, partly by addition of the no longer used music of the court church and the court opera, developed into one of the most important historical music collections in Germany. From 1926 on the Schrank II music was reshelved a second time and received the three-part call numbers which are still valid today. 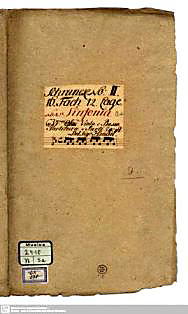 The original Schrank II call numbers are documented by the lables on the often still preserved covers. Those call numbers always consist of a shelf and a position number. Fürstenau changed them to a consecutive enumeration extending from Mus.c.Cx 1 to 1576. Accordingly, for those Schrank II manuscripts which no longer have a title designation, the exact location (shelf and position) within the Schrank II system can be reconstructed. Nowadays the manuscripts carry the customary three-part call numbers, which consist of a four- digit number for the composer (e.g.: 2392 for Telemann), a capital letter for the genre (for instance O for concertos) and a consecutive enumeration (e.g.: Mus.2392-O-2). In the case of anonymous works the four-digit number is replaced by a 2 (e.g.: Mus.2-N-13,2). One must consider that from the end of 2009 on the practice of adjusting call numbers has been abandoned. If, for instance, the composer of an anonymous sonata has been determined in 2010, the “anonymous” call number will remain; likewise, in the case of an uncovered misattribution, the call number relating to the “wrong” composer.